Today I Re-potted a Tree 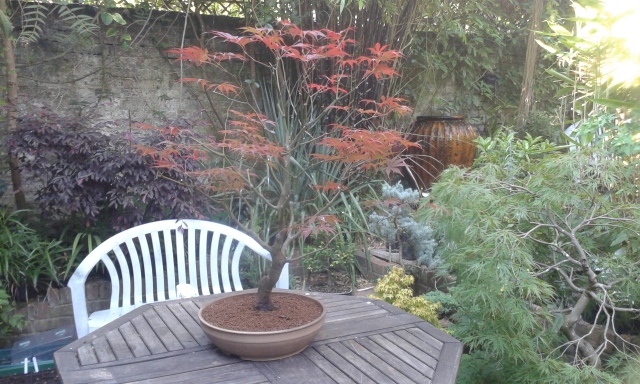 Finally the allotment is under control, the squash and pumpkins have taken off, the beans are climbing the poles, and even flowering.  I’ve harvested the last of the strawberries and the raspberries are coming on stream.  I’ve picked the first few blackcurrants.  This morning I picked the first of the broad beans and dug up the first potato plant in the row to find half a dozen new potatoes under it.  It was jolly warm down there by 11am and there’s been no rain to speak of for weeks so after many trips with the watering cans everything has enough to keep it going for a day or two.

It’s not really the time of year for re-potting bonsai trees, especially deciduous ones.  The norm is to do them just before the leaf buds are about to break in the spring.  The thing is I didn’t get my act together and make the new pot in time.  Then I didn’t have enough of the granular potting soil that they seem to like.  I tried to get that at Heron’s Bonsai last week, but they don’t have it.  On Friday I found some on Amazon and ordered it.  I was sitting for meditation later that afternoon when the doorbell went.  I didn’t move as I thought D would get it and it would probably be for him in any case.  It was my bonsai soil.  It turned out that the supplier is based in Dartford and as the chap was coming this way he just stuck some in his car and dropped if off as he was passing.  Order to door in about two hours – that’s service!

So this afternoon I pruned the tree hard.  It is very vigorous and I do this every year.  Having removed so much of the top growth it seemed safe to disturb the roots so I re-potted it in the pot that came out of the kiln last week.  Then I sat down with a cup of tea to admire the work that nature and I have collaborated on.  I started this tree from garden centre stock abut 15 years ago.  It is Acer Palmatum ‘Bloodgood’, and although the leaves are a bit big for bonsai they are such a fantastic colour in spring and autumn that it’s worth it for that alone.

This entry was posted in Allotment and tagged bonsai. Bookmark the permalink.

3 Responses to Today I Re-potted a Tree