It’s been ages since I posted but nothing’s wrong, it just didn’t make it to the top of the to-do list until now.  One thing that has kept me busy is watering at the allotment as it was dry for so long.  The heat wave ended with a glorious thunder storm and then several days of showers so after a few days of not getting there things had been growing like mad.

I’ve been harvesting kale for a while.  I have dwarf green curled, Cavalo Nero and red Russian.  The first two of those had produced a lot in my absence and there were some courgettes and some runner beans too. 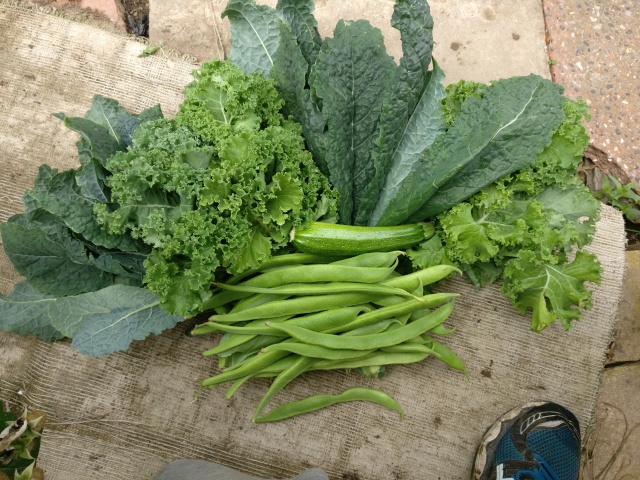 Only the day before I’d read and article on allotments as therapy, which referred to a recipe for spanakopita, the delicious Greek spinach and feta cheese pie.  The article said that it could also be made with kale so I thought this was the perfect opportunity. 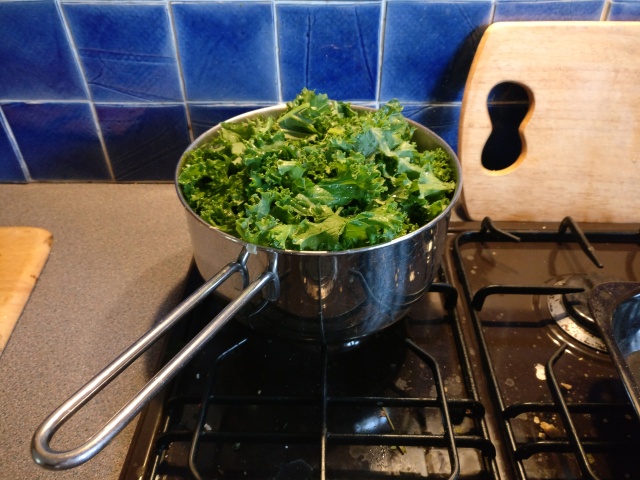 The recipe calls for 1Kg of spinach, but I figured that spinach wilts down a lot more than kale so I used just over half that amount.  That still filled quite a large pan before steaming it down.  I then let it cool in a colander before pressing it down to remove the last of the liquid and proceeded with the recipe.   I used onions from the allotment and just used more of them rather than a mix of large and spring onions as per the recipe.  I reduced the amount of mint as D isn’t keen on it and neither of us like dill so I substituted a little fresh French tarragon. 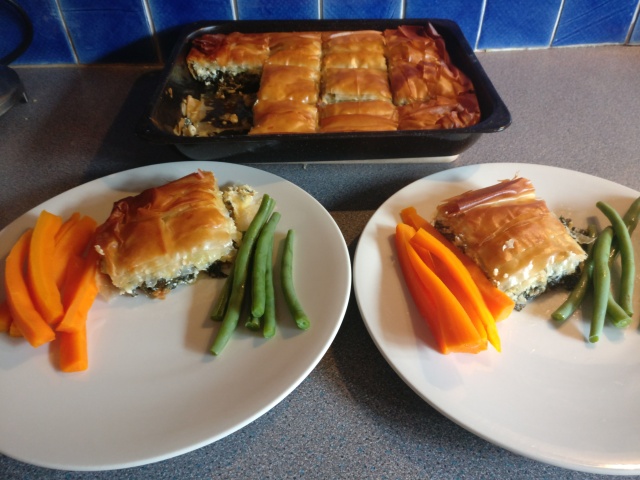 The recipe says to cut the pie into portions before baking.  That seemed a a bit odd to me.  So much so that I forgot to do it and had to get it out of the oven again to do it.  A quick tip from my Greek friend O, is to only cut the top of the pie.  If you don’t do that it all shatters and makes a mess when serving, however if you leave the bottom intact you stand a chance of being able to lift the whole thing out onto a board.  Served with French beans from the allotment but the carrots were bought.  There are carrots at the allotment but I forgot to lift any and we had a few at home to use up.

Personally  I don’t think I see the allotment as therapy.  Quite often it feels like just another chore to add to the list.  On the other hand, eating just-picked fresh vegetables in a home made pie is most definitely therapeutic.

This entry was posted in Allotment, Food and Cooking and tagged allotment, kale, spanakopita. Bookmark the permalink.