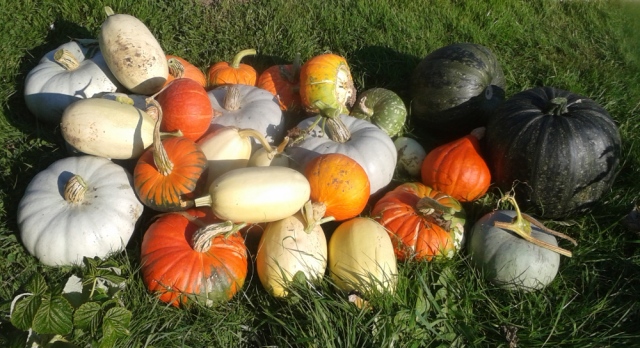 I’ve made no posts for quite a while.  Everything is fine, it has just been a busy summer and world news has been a little scary.  I have a sense of holding my breath. (Not literally of course, I would be more than a little purple in the face by now) It feels like watching a ski crash in slow motion and hoping that the racer will somehow recover balance and swosh past the finish mark.

Meanwhile the UK experienced a rare event: a real summer.  Day after day the sky was blue, the wind was light and warm.  There was talk of water shortages and hose pipe bans but it seems that there was enough water from the previous season.

Of course that didn’t help things at the allotment and it was necessary to try to get there almost every day to water.  Even so, things have suffered somewhat.  My potatoes produced a good crop but neighbours have not done so well.  The climbing beans eventually made it to the top of the poles, but the crop has been about half the usual output.  Most of the beans for drying are already picked and sitting in bowls in our living room.

We had strawberries, but they were over fast.  The pumpkin and winter squash pictured above were picked at the end of August, whereas I would normally wait until the end of September at the earliest.  The Crown Prince are a good size, but the spaghetti squash and Turk’s Turban are smaller than usual.  The only reason I have a good crop is that I ended up with an extra bed where I re-structured the old compost bins and planted it up with all my spare plants.

The weather has returned to our usual mixture of sunny intervals and showers over the past few weeks and the grass soon greened up.  The runner beans are producing a new flush of flowers and the yacon have finally started to grow.  It feels as though the Earth is finally breathing again – at least my little patch of it.

As to the political situation?  Still hoping.

This entry was posted in Allotment and tagged allotment, pumpkin, squash, weather. Bookmark the permalink.