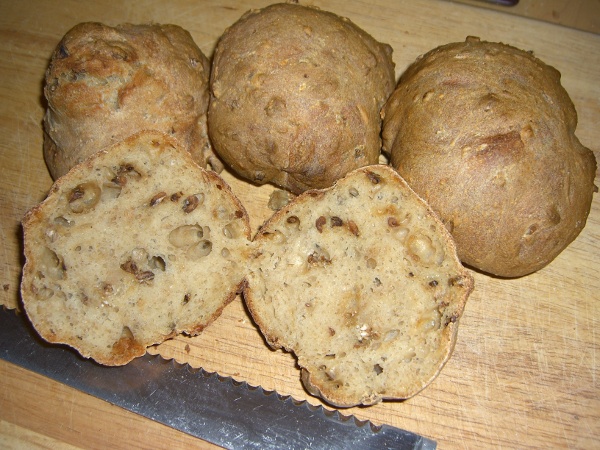 My friend Mary told me about a recipe she had for “Shower Rolls”.  The idea is that you can pop them in the oven whilst you have your shower and they will be ready for breakfast when you are.  What is more, the recipe is “no knead” and only takes a few minutes to prepare the previous evening.

Mary says she had used a mixture of spelt and malthouse or granary flour.  I searched on line and found a what might have been the original recipe which several people attribute to Trine Hahnemann’s “Scandinavian Baking”  which gives:

That would make about double the quantity, but uses all white flour so it looks as though it can be varied considerably and still work.  I used a combination of light malthouse flour and French type 55 bread flour.  I increased the quantity of the type 55 as it doesn’t absorb as much water as my normal bread flour and I’ve been caught out by that before.  Mary uses fresh yeast, but I had some instant so I used that.

The dough should be mixed the previous night, or at least six hours ahead.  Mix the honey into the water and if using fresh or active dry yeast mix that in too.  Instant yeast can be added to the flour.  Mix the salt into the flour and then combine everything in a large bowl. Give a good stir using wooden spoon as it is a very soft dough.  Cover the bowl with cling film or a plate and place in ‘fridge over night.

Next morning: preheat the oven to 225C/gas7.  cover a baking tray with baking paper and using 2 spoons mould the buns and place on baking tray.  Bake in oven for 20 mins.  Put remaining dough back in the ‘fridge.  Repeat every morning until there is no more dough.

I made the dough on a Wednesday evening and we had the rolls for lunch on Thursday.  We didn’t need any more until Sunday, when we decided to make “gourmet burgers”.  We used some posh steak haché burgers, Jarlsberg cheese slices, home made tomato sauce and sliced gherkins in sweet vinegar.  I tried to make the rolls a little flatter and larger but they still rose lots.  The salad on the side was just to make it nominally healthy.

I used the final part of the dough the following Thursday – so a whole week after the first bake.  I liberally floured the counter and divided the dough into two.  With floured fingers I spread it out into a square and placed some cubes of Stilton cheese in the centre.  I folded each of the corners into the centre and then put it fold side down on the baking sheet.  Lunch was these cheese filled rolls – almost like cheese doughnuts, with soup. 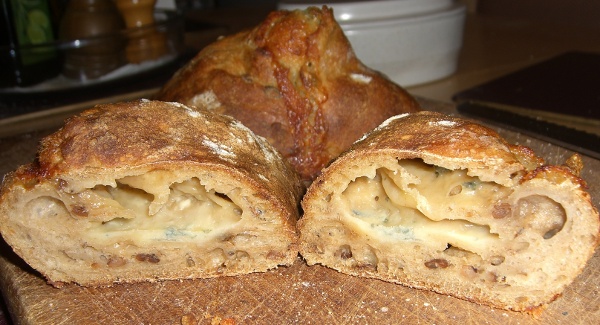 This entry was posted in Food and Cooking and tagged bread, gourmet burger, rolls. Bookmark the permalink.