“Blood stop” on the arm

There is an interesting technique in Thai massage called ‘opening the wind gate’.  In English it is often referred to as a ‘blood stop’.  This sounds dramatic, whereas it is a very calming technique.  Pichest, my Thai teacher simply refers to it as ‘warming’.

There are several points on the body and methods by which a blood stop can be performed.  In the groin, at the top of the arm and it is even possible to do one in the abdomen.  The idea is to compress an area such that blood flow is reduced.  This is maintained for a period, generally up to a minute, and then released.  The sensation for the recipient is of a slight tingling during the pressure and then a warm glow flowing along the limb. 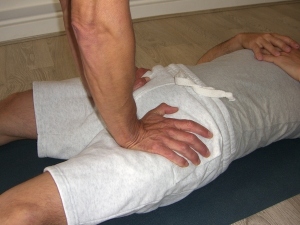 “Blood stop” on the legs

In practice this technique is seems very good for tired or overused muscles.  It is generally done after the limb has been massaged along the energy lines and to my simplistic way of thinking it seems to flush out waste and revitalise the circulation.  In Thai sen line theory it restores the energy flow in lines which tend to hold emotional tension.  In the Asokananda lineage the teaching is not to use this for clients who are pregnant,  menstruating or on those with high blood pressure, varicose veins or a heart condition.  I’m not clear if that is also Thai teaching, or whether it was adopted for teaching those with a Western mindset. Pichest did not mention any such restrictions but his assumption would be that because you listen to the client’s body you would know what was appropriate or not.

There is, however one problem.  Insurance policies in the UK explicitly exclude it.  I asked my UK teacher if there was some reason for this.  She thought that it was a knee-jerk reaction of insurance companies who suddenly discovered that Thai massage was not some harmless woo-whoo waving of hands about.   I quite agree that Thai massage has the potential to be harmful.  Careless application of many of the techniques could cause injury and as a result it is rightly in a higher insurance category than ‘Swedish’ or Western massage.  However, I’m not convinced that there is any real rationale in singling out blood stops as a prohibited risk.  After all, this is something that happens to you briefly every time you have your blood pressure monitored or if you rest in an awkward position, giving yourself pins and needles.

In last week’s issue of New Scientist magazine there is an interesting article  on a ‘newly discovered’ technique to improve the survival rates of surgery, heart attack and stroke.  It is called ‘remote ischaemic conditioning’ and it involves compressing the upper arm for some minutes, restricting the blood flow.  Hmm, sound familiar?

In animals it has been found that the improvement of receiving this treatment “can even be passed from one animal to another with a blood transfusion, suggesting that the squeezed limb released some sort of beneficial chemical signal into the blood.”  This work also “suggests the technique benefits the brain and other organs.”

So from my perspective this appears to be one of those cases where Western medicine and research is catching up with something that has been known on one level in the East for some time.  Eastern medicine might not have the physiological explanations or Western-style science behind it.  It does however, have thousands of years of observation.  “If you do this under these circumstances the effect this so-and-so.”  I have nothing against well researched, scientifically based medicine.  Of course we should tread with care, however I do think it would behove us not to dismiss Eastern wisdom quite so readily.

This version is a little bit intimate but shows how Thai massage benefits two people: I get to practice plank at the same time.

A quick note on the photos:  the simplest way for me to get some photos to illustrate this was to grab someone at yoga class at The Freestyle Yoga Project on Thursday evening.  Thanks to Ruth for taking the photos and to Alex for lending me his body – especially as he had no idea what I was going to do.

4 Responses to Oriental Wisdom or Danger?