Yesterday I broke one of my cardinal rules of cooking.  For everyday meals I try to aim for things that require only ten or fifteen minutes of my time.  That can be ten minutes followed by an hour in the oven, or ten minutes time at the hob.  Sometimes that gets extended, for example when making lasagne or shepherd’s pie.  In those cases more time is required to prepare the components and assemble the dish.  However the pay-back is that I make two at a time and freeze one.  So overall the timing still works out.

We had started on the last Turk’s turban squash from last year’s harvest.  (These are so pretty,  and keep so well I’ve already got some ready to plant out this year.)  I had used half of it to make squash and sweet potato soup.  I liked the idea of using some along with celariac to make some ravioli or mezzaluna pasta.

I’d recently had a crisis when making lasagne of finding that I had everything ready to go and the box I thought was lasagne sheets in the cupboard turned out to be arborio rice.  I made lasagne from scratch with egg, flour, water and salt for the first time in years.  Even digging the pasta machine out of the bottom of a kitchen cupboard which had clearly not seen a Spring clean for several Springs in a row!  It worked out well so I thought that mezzaluna, a sort of semicircular ravioli, would be worth a try.

What’s more June Perry, a potter whose blog I follow, had mentioned a delicious pasta sauce using Dolcelatte cheese and Parmesan.  We had all the ingredients to hand bar the Dolcelatte, and we have had that from Sainsbury’s in the past.  D picked some up on Saturday and I was ready to go.  I reckoned I would make a fair sized batch of filling, make plenty of pieces, cook some and lay the rest out on trays to freeze.

The filling broke the ten-minute-rule to start with.  I cut the squash and celariac into small cubes and fried them in olive and toasted sesame oils with the garlic.  This was a faff, and required me to stand there stirring it constantly.  Better I think to have steamed the veg first and then fried the garlic in a little oil before adding in the cooked veg and blitzing it with the stick blender.  Anyway that was done and set aside to cool. 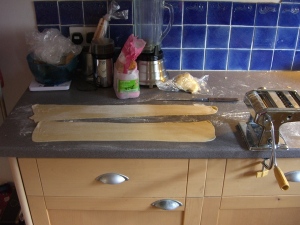 Next error was with the pasta.  I’ve always made it with 300g flour to one egg and a big pinch of salt and enough water to make a dough.  I looked up some recipes for stuffed pasta online and they all recommended full-egg pasta.  That’s one egg per 100g flour.  They also said use plain, strong or 00-grade flour.  Well I decided on two eggs for 300g flour and I would use half bread flour and half plain.  The recipe said put it in the fridge for an hour so I did that.

When I tried to put it through the pasta machine it wouldn’t come to the right consistency.  It was too rough and fragile.  I nearly started again with my original recipe using only plain flour but in the end by putting it through the rollers enough times I managed to get it looking OK.  Time was ticking on and dinner was starting to look like it would be seriously late.  I rolled enough sheets to make 25 or so discs, and cut them out.  That was a pain – whilst a knife would separate the pasta on the work surface the pastry cutter didn’t seem to make a clean cut, even when dusted with flour.  Too much faffing around.  Mezzaluna were making me mezza-loony.

The rest would have to wait.  I filled those and started on the sauce.  That was easy enough.  I made half of June’s recipe as she had suggested.  As you can see the first slosh of wine may have gone in the sauce, but the second went in a glass for the cook.  Even half the recipe made more than twice the amount of sauce I needed to serve the pasta I’d made for two of us.  I think I would make this recipe even simpler by reducing the wine and chicken stock rapidly and then adding only half the cream and perhaps a little more dolcelatte to get the required coating consistency.

So dinner is served and it’s OK but not overwhelmingly good.  The sauce is indeed delicious and I’ll be trying that again.  The filling would have been better with a little more garlic and sage.  Most of the afternoon seems to have disappeared on this project and we still felt in need of dessert.  (Dessert is allowed at weekends.) D made a dash to the corner shop for some of Mr Kippling’s apple pies and I made some custard to go with them.

I quickly decided that I was not going to spend the rest of the evening making the remainder and freezing them.  Helping myself to most of the rest of the bottle of Frascati seemed like a much better idea.  The rest of the filling will get made into soup for lunch.  The dough is in the fridge and I’ll probably run it through the pasta machine to make tagliatelle or linguine in a couple of days time which we’ll serve with the rest of the cheese sauce  maybe with some chopped ham thrown in.

That’s the last time I break the ten minute rule for a bit though.  I’ve got to put in some work in the pottery to have enough stock for South East Open Studios.  Only four weeks to go and my potter’s wheel is still in the back of the car following a charity have-a-go session I did on Saturday.

This entry was posted in Food and Cooking and tagged mazzaluna, pasta, squash, turks turban. Bookmark the permalink.