Spring is sprung!  There are lots of indicators from the daffodils and hedgerows in bloom, blue tits nesting in the box, to the fact that we have actually chosen to sit on the garden bench in the sun for ‘elevenses’ a few times.  And whilst sitting there I noticed that the buds on the large bonsai maple were starting to move and realised that I hadn’t repotted it for a few years.  As the buds swell and before they break is the perfect time.

First job was to use the sieve to grade the akadama.  Akadama is an imported Japanese granular clay soil.  The structure with lots of knobbly surfaces and high water absorbency seems to create a perfect environment for the roots of a tree in a pot.  I don’t use it pure as some do: I introduce a little loam based compost and some sharp sand, plus a little of the soil I’ve removed from the tree.

Out of the pot – root-bound

A tree in the wild has to grow long hose-like roots to get at nutrients increasingly far from the trunk as the tree grows.  In a bonsai those nutrients are going to be provided by me.  So the main aim in repotting is to remove those thick roots and encourage lots of fine nutrient absorbing hair-like roots near the trunk.  The other thing those long roots do is anchor the tree into the ground.  In a pot the tree is held secure by some wires through the holes in the bottom.  So once these are cut the tree can be lifted out.

Then the roots are combed out and some of the old soil removed.  Then I can see what’s what, remove some of the roots and make space for new ones to grow.

The pot is prepared by brushing out and installing new wires to hold the tree safely.  Coarse grains of soil are put under the tree and then finer grains around it.  They are worked in until the whole thing is packed tight.  The soil is then watered and it grips both itself and the tree.  It is important to work fairly quickly as roots exposed to the air for long will dry out and die.

Having removed some roots and disturbed the remainder the tree will have reduced capacity to take up water.  Repotting before the buds open will hold back the tree a week or so until the new root hairs which absorb nutrients have had time to re-form.  This is therefore a good time to prune the upper part of the tree, reducing its requirements.   Pruning end-growth on the branches at this stage will hopefully also trigger the formation of new buds back along the branches nearer the trunk. 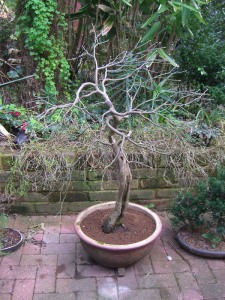 This particular tree was planted by D’s father as the centrepiece of an alpine bed about 45 years ago.  It suffered severe die-back at some point. When D’s mother decided to sell the house and move to a flat we asked if we could take the tree.  From there it went into the ground at our flat in Five Oak Green.  It was only when we moved into Tonbridge a couple of years later that I dug it up again and got it into a bonsai pot.  It was then that I realised that the original mesh bag, which should have rotted away, was still there restricting the roots.  No wonder it had struggled!  It has lived on as a bonsai for about 18 years now.  Experts have told me that it is not the best subject for bonsai – but we love it all the same.  I’ll try to remember to photograph it when it comes into leaf in a few weeks time.

This entry was posted in Uncategorized. Bookmark the permalink.